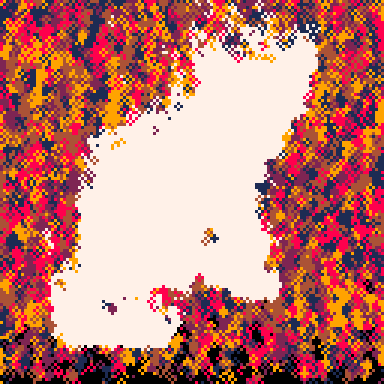 Two weeks ago, I wrote week 22’s recap in which there’s a lot of JOY and I wrote how on week 23 I would work on gameplay for JOY. The next day, I began a different project.

In week 22’s recap I also wrote about me wanting to do tiny unrelated projects. That’s what I did the last two weeks.

I started a pack of small Pico-8 games! The idea was to make 6-8 games in two intense weeks, gamejam style and then take a third week to correct stuff and do marketing and at the end of that third week, release the pack for a modest price of Not-Much-At-All.

Right now, one-and-a-half week after starting the pack, I am still making the 4th game and I’m very late on everything so I’m going to make this post quick, sorry!

The main reason I am so late is that it seems I over-estimated my ability to come up with new, fun and adapted concepts for gameplay mechanics. The idea for the first game was already on my mind and the idea for the second started off as one of them what-if that came through my mind while I was making the first game. But then I had to do the third game and none of my ideas seemed that good anymore. After almost two whole days of pause, I finally found something. It also took some effort to find the idea for the 4th game but I got there. I don’t really know what’s going to happen about the 5th and 6th games.

But enough talk, here are the gameplays of the games!

I’m going for arcadey gameplay and colorful graphics, basically the stuff most of you know me for and doing my best out of it!

Here is the eye from that last game but all alone because I like it a lot:

I need to get back to it!

This coming week I need to finish the pack of games so I can focus on polish and marketing this next week-end and in the beginning of the next week! The release date is October the 19th!

After it, the development of JOY shall resume!

Have a nice week!