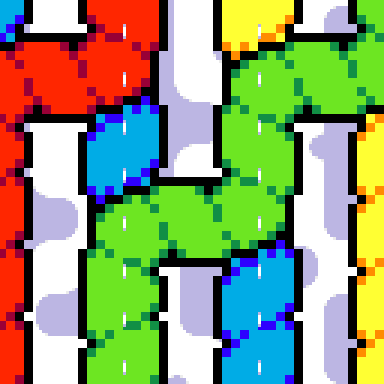 After finishing Pac-Bois, I started a new project with Eliott!

This project would consist of a collection of games, where each game links to another after its gameover, and there is an inter-game flow, with global score, difficulty progression etc.

This project is mostly a really good excuse to make a lot of tiny games.

There’s also a controls system that only lets us use a limited selection of inputs (arrow keys, 2 action buttons, and the mouse) but has built-in correspondance with controllers, and is linked to the controls screen, which displays only the controls that you want to use.

The framework is works with Sugarcoat and uses a palette I made just for the occasion!

Eliott has been working on the system to repertoriate the games, getting their info from any game, and going from one game to another!

All this turned out to be quite technical and actually took most of those two weeks!

But pretty soon we already had a test game, made by Eliott. Where you control a fish and you shoot targets!

This game follows the gameflow we agreed should be similar to all the games: it’s fairly straightforward, it has simple controls, the game takes about a minute to play, and at the end it gives out a rating out of 100 points, which is shown on the gameover. And then you can continue to another game!

I made a game as well! I actually just finished it yesterday, on Monday, but it still counts! You untangle ropes over a given length, and you have to do it in under 90 seconds! The game plays sort of like a Guitar Hero game: you have to press the directional keys in the right order to untangle the ropes.

On the graphical side, the ropes are glyphs (sprites) resized up to 3 times their original size, with just two glyphs: the straight rope, and the quarter-turn-bent rope. In the background, you can see tile-style glyphs, in random patterns.

Those patterns are generated by filling a 2D table with random booleans, and then use the classic 4-bits mask trick, where you take a 2×2 square of values in that 2D table and each of these booleans make up a bit in a bitmask, giving out a unique number for that configuration, corresponding to a tile/glyph, to be drawn in the middle of that square.

The buttons shown at the bottom of the screen are superpositions of more glyphs. The progression bar is drawn with one more glyph for the knob, resized down this time, and drawn two times to give it volume, and simple rectfills for the bar underneath.

The gameplay code is also kept quite simple: there is a 2D table of booleans storing the knots, where there cannot be two consecutive knots on one line, because each knots takes two ropes, and so consecutive knots would need to share the rope in-between somehow. The knots are placed at random, only avoiding that one condition.

The new knots make the game a lot more interesting, because otherwise you could just mash all the keys to unmake all the knots.

The gameplay itself is quite a simple concept but it works well in the end!

You can play Tangle here! And after the gameover it will link to more games as we make them!

These two weeks were very important for this new project, as we did a lot of groundwork. Now we start working on the meat of the project: the games!

I want to thank all my Patreon supporters for their continued support! If you like when I release a new game, then I think you will love this project!

Here are the names of all my 3$+ supporters:

The coming week I will be making more games and probably do some lighter work on our framework!

Have a wonderful week!