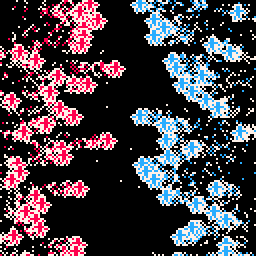 LOOK AT THAT LOGO:

This thing took me all my Monday after writing Week 21’s recap. I’m quite happy with the result but I still want to work some more on it later.

On the rest of the week, I kept working on the game itself. Specifically, on gameplay and also on visual effects.

On the gameplay side of things, I worked on levels! The level you’re at is displayed at the center of the screen and little squares floating around let you know how many more bounces you need to get to the next level.

And every five levels, there will be a special level! Meet the first example of these special levels: the Snake!

I actually have lots of concepts for special levels, drawn in a small booklet, but this is the only one coded in for now and it will be subject to changes.

On the visual side of things, there’s one more background gfx (with the old UI because it was made before).

More recently I also made the choice to restraint the color variation from the whole rainbow to only a portion of it at any one time. While I liked having all the colors, this will allow for more visual diversity throughout the game, which is infinitely more valuable to me.

Here is some live-coding I did at some point. The actual coding took 2min40s but I sped that part up so the video would fit on Twitter:

And during the week I also kept working on the secret project! I’m actually still making base code for it but I did use that base code to make short gifs, both testing the code I wrote and making some cool content!!

Bonus: on this morning of Week 23’s Monday, I made a small Pico-8 cart, or rather a Pico-Jr cart, using an in-engine (even) more restrictive nested engine, Pico-Jr! And here is what I came up with, AutoCell!!! In it you can control some 4-colors cellular automata with five buttons. It was fun to make!

Good work was done on Week 22! JOY’s development is going well even though I’m starting to want to work on a thousand other tiny projects I come up with. This week I’ve also started thinking again about setting up a Patreon. I think I came up with a good recipe to make it work but I’m still unsure… I need to think some more about it but maybe I’ll write about it next week!

On Week 23 I’ll be working on JOY still. I’m setting my focus on in-game progression now. Levels are a good start but they still need a lot of work. I also want to start adding power-ups and more special levels. I also want to make totally unrelated stuff but we’ll see about that!

Have a nice week!