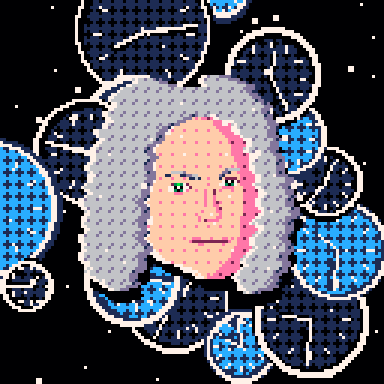 A rather good week!

This week I mostly made animated Bach portraits and wrote about the effects used in them!

Chris (@gruber_music) has been transcribing Bach’s ‘Invention’ musics into Pico-8, chiptune style, admittedly through some sort of dark and ancient unholy ritual. The result actually sounds really quite good and very loyal to the original, which really should impress anyone who ever tried to do anything with Pico-8’s music tracker.

A few months back, Chris told me all about that and he asked me if I would be interested in making animated portraits to go along with the music. And I said ‘yes’!

Cut to now and we already released 5! And there’s going to be 5 more this week and then 5 again the next week, and then… that’s it. That’s 15 animated Bach portraits to go along with 15 Bach musics! And with them, 15 short technical write-ups!

Yes, for each of those portraits I’m writing a short tutorial/guide about one of the effects I used. They’re all really simple and cheap effects but they generally work really well too, and as usual, I try to keep my explanations simple and accessible!

Those short write-ups are being released on my Patreon, please check them out!

Also check out Chris’ Twitter and Patreon and consider supporting him for his awesome work!

Here’s the Youtube playlist with all the portraits that are already released!

I’m getting some slow progress on Bombs On Venus! The Bach project has been taking a lot more time than I thought it would, but also the Pico-8 token limit is making Bombs On Venus somewhat of a hassle to work on. In particular I need to rewrite the level generation entirely, because the original code is so poorly optimized. And I’m kindof afraid of that task. :X (I’ll do it anyway tho, It’ll just need some time)

Finally, it’s becoming obvious to me that now that I have both my energy and my motivation back, I need to mix in some order as well. These last three weeks I’ve worked a really good amount of hours, but each day was a mess. Sometimes I’d work all day with 15 minute breaks, sometimes I’d just work the second half of the day, and sometimes I take 1-2 hours breaks in the middle of the day.

Honestly, I don’t even feel so bad about that. What bothers me is that I wish I had more time, both for my projects and for other things. And I feel some organization would definitely help me with that. Also, I’d like to be set in a routine so that when my motivation fails me (it will eventually, that’s how it goes) I can still keep on working without feeling like I’m forcing myself.