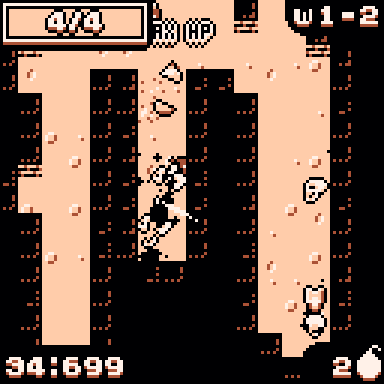 It was actually another very good week!

This week I worked on the game I had just started at the time of the last recap!

At first I wanted to finish it for Wednesday, when the Fantasy Console Jam was going to end. But on Tuesday I decided to add things to the game, such as different environments and a boss. And now the game is still unfinished.

But! I’m super happy with how the game is shaping up! It’s already pretty fun, even though there’s no difficulty progression (yet) and the boss is still missing!

And this won’t surprise anybody but I did hit the Pico-8 code token limit. And now, working on this game is even slower! It’s ok though, I don’t think I have that many more things to add at this point, and there’s definitely some code to optimize so I should be able to get the tokens I need.

The game is called Bombs On Venus, you play as a higher-being-with-a-sword and your goal is to slash all the bombs on every level before the timer runs out and all the bombs explode! You’ll also have to be mindful of the floating skulls who invaded the place and will attack you on sight.

The whole game is a love letter to both the GameBoy console and Nuclear Throne, a game I spent many many hours on.

And since it’s coming together so well, I’m considering making this a prototype/demo for a bigger game! Not too much bigger, but I’m thinking it would be a great test run for my SUGAR framework! I could spend 1~2 months on it and release it as a premium game, on Itch, Humble Bundle and Steam, for 3~4$.

In the meantime, I’m not sure what I should do with the Pico-8 version. When it’s finished, my Patreon supporters will have access to it, but I’m not sure whether or not I should hold the public release until the premium game is ready to release soon after. This needs some reflection, so we’ll see!

That’s pretty much it for this week though! Even though I only worked on this game, I made really good progress all week and I’m very happy with the result!

Today starts the release of our collaboration project with Chris! (@gruber_music) Every day for 15 days, we’ll be releasing a Bach composition remade in Pico-8 by Chris, along with an animated portrait made by yours truly. For each portrait, I will be writing a few paragraphs about the funky effects I came up with, on the Patreon! At the end of the 15 days, I’ll compile them and put them on the blog as a special Doodle Insights!

I also still have an unfinished Pico-8 Doodle and a start of Doodle Insights that I didn’t touch since last week. We’ll see if I get time for that this week!

This week I’m mainly going to be working on those Bach portraits, I will try to finish Bombs On Venus and I will be working on SUGAR again!