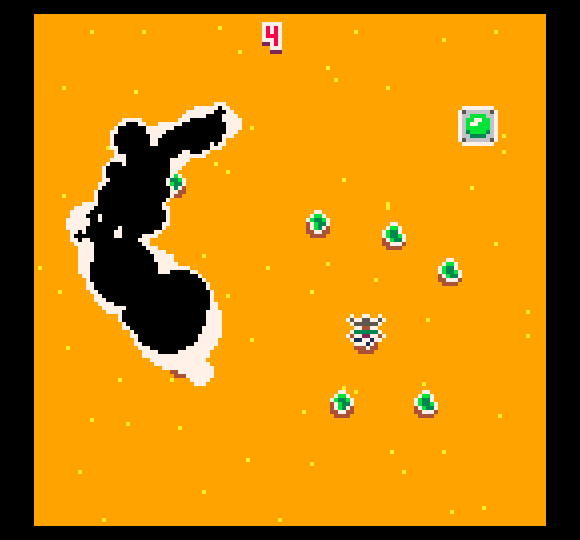 The week started off with the making of Dust Dasher for the #mysticwestern jam! Then, I started working on TETRABLAST again! And along the week I was also contributing to TweetJam!!

So Monday I remembered that the mysticwestern jam was going to end that week, looked it up and found out I had two days and a half left to do a thing. So I did a thing! The thing is called Dust Dasher and it is a Pico-8 game where you have to dodge a nightmarish explosive worm, push a button, the button disappears and so does the worm and another button appears shortly, with another worm. The GIF explains it better!

Like for CHOMP I wanted to have great game-feel, despite the very simple gameplay, except this time the game was a bit less abstract.

The results of the jam are not in yet but I doubt Dust Dasher will do very well because of the rating categories which are super abstract and not really fitting with my game at all. Not even an “overall” category… But I am really happy with the game! I’ve been getting some very positive feedback, especially from the other participants to the jam!

Play it here and tell me what you think of it maybe?

Now let’s talk about TweetJam for a minute! TweetJam was started last week on Wednesday by Adam Atomic and the idea is very simple: Make something cool in Pico-8 that fits in 140 characters or less and post the cart with the code on the TweetJam thread in the BBS (also, optional: actually tweet the code and a gif of the cart).

This is absolutely awesome for several reasons.
The first one is that such a constraint is completely forbidding you to make something big, so instead you’ll make something really short in relatively small time.
The second one is that is completely showing off Pico-8’s possibilities, and in doing so, it is adding more eyes onto Pico-8 and the members of the community (check out the hashtags #TweetJam and #TweetCart on Twitter).
The third one is that it is super cool for beginners, because there is so many very short codes to analyze and because it is so easy to actually contribute (several TweetJam carts are first carts for their creators).

I seriously recommend you check out that thread, there is amazing stuff in there!!

Adam said the jam would not have an end so you are also free to code something 140 characters long and post it now, it’s a really cool exercise!

After I finished Dust Dasher and while occasionally making a TweetCart, I started working on TETRABLAST again!

First I added some more weapons to the game and it was cool but then I tried to set up the Android export and it was awful. Something I really hate in gamedev-ing is setting up stuff. I think it’s generally badly designed and more importantly, boring as fuck. So I very quickly went on to something else and coded parallax, and some more squishy animating into the game.

But I have to set up that Android export. I definitely should have done it in the very beginning but I didn’t so I have to do it now. I wish I could go lazy and actually make it a PC game but the game was thought with touch controls in mind, not keyboard or gamepad. And there you have the objective of this next week: setting up the Android export and getting it to work properly (bonus objective: getting the game to work on an actual phone).

And there you have it! Week 10 was pretty good on the whole! I released Dust Dasher and I’m pretty proud of it! I made some cool stuff for TweetJam and that was awesome! And I went back to TETRABLAST which is definitely good!

Next week there should be a photo of TETRABLAST running on my phone!

Have a good week!