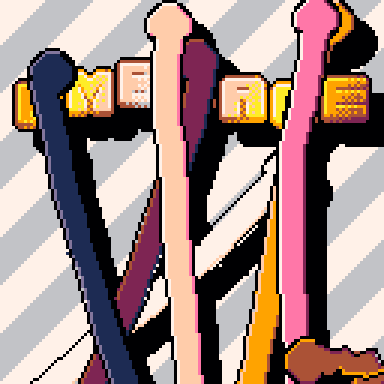 During weeks 125 and 126 I went on family vacations to southern France. There I worked a tiny bit on Embrace but mostly tried to relax and rest. On week 127 I slowly took up work again, finished Embrace and released it!

Embrace is a very short experimental game about embracing things that happen in life.

For the last few months I’ve been striving to try and make more meaningful games. Games that convey a message, and/or feelings. This is the direction in which I want my work to go in the future.

Sadly with the Over-The-Top Breakout Game, there’s not much to work with in that sense. There is a feeling of exaltation, which is good, and it is very colorful and happy, but for now it doesn’t really go beyond that. However, four weeks ago I got the idea to ask my partner for a random word and make a quick game around that. When she gave me the word “arms”, my mind immediately went to the idea of a game about hugging. From there, Embrace quickly took form on paper, and I was working on wiggly arms tech.

From there you can move individual points and see what happens, but the arm should at least try to keep a consistent length. In the game you’re always moving the last point of the arm and you can see the rest of the arm try to keep up, while also pulling back the point you’re moving, giving a sort of organic feel to the controls of the game.

That is mainly how it goes, with a few hacky caveats to make it feel a bit better.

After being done with the arms, I went on to make ghosts. The first few ghosts turned out quite creepy but eventually I got to the cute result that I was looking for. I won’t go in details into the tech there, because it’s not really as interesting. I implemented my own half-circle rendering and hacked it to get those lines that go on the sides, then made the tail do the same. The eyes are simple circles and the noses and mouths are sprites.

Those ghosts are the representations of the ‘things that happen in life’, through what’s written on their forehead, but also through their colors, the colors of the background and the smile or frown they have on their face when you get to them.

That, and the interaction of hugging the ghosts, makes up the narrative of the game. There is a defined progression to the ‘things’ you encounter and you move through it simply by playing. The actual gameplay mechanic is satisfying but not particularly challenging, to let the players’ attention catch the narrative instead. I didn’t want to shove the player’s face into the narrative, but I wanted them to take notice and pay attention to it. This balance of light subtlety and obvious intent was important to me.

Yet still, considering the feedback I got, a few people either missed the narrative, didn’t care for it, or didn’t expect it to be as calculated as it was, saying I should have added a score system, or assuming the game goes on endlessly. (which it doesn’t by the way, it 100% has an ending)

But thankfully, that’s only a small part of the feedback I got. The biggest part of the feedback was extremely positive, expressing thanks, saying the game made them smile or made their day a little better! I was pretty overwhelmed in fact as to how much attention this weird little thing got, harvesting more views in the first three days than any of my previous projects!

This result is very encouraging, and let’s me know I can reach an audience for another project, similar in intent but bigger, that I’ve been thinking about for the last two months. That one will probably come after I’m done with the Breakout game and also maybe after I finally release an ‘early’ vers ion of SUGAR too, so it’s probably for 2019. We’ll see!

If you haven’t already, please do give Embrace a play! It only takes a few minutes to finish. 🙂

In the meantime, I want to thank all my Patreon supporters! Even though they’re not getting charged for the month of September, because of the vacations I took, their continued support means an incredible lot to me and I’m ever thankful for it. Here are the names of all 3$+ supporters:

Special thanks to Joseph White, Spaceling and Ryan Malm for supporting me at the 16$+ tier!

This week I’m working on SUGAR! There are a few technical things that are preventing me from releasing anything made with it, and I intend to get rid of all of them this week. Wish me luck!

Have a good week and a very nice month of October!