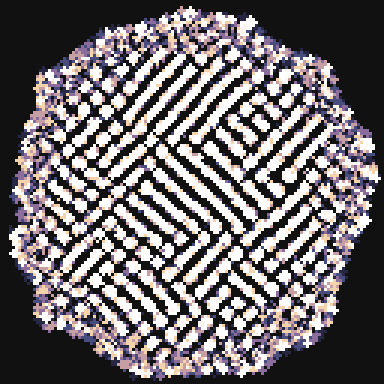 Not a great week!

This week I worked a bit on LOKPIK, then I got an idea for Melee and focused on that. I also made a tiny thing called Timetable, to keep the day organized!

And here’s some cellular automata!

For the previous cellular automata I showed here, I was getting every cell’s neighbors’ information in a square around the cell. In this one, I’m also checking the neighbors inside a square, but this one tilted 45 degrees. Next up I’ll be implementing a function that gets the neighbors in a circle and that should get me some very organic-looking result and it should be a lot of fun to play with I think!

Last week I said I’d be finishing the LOKPIK prototype and move on to a bigger version if I liked the prototype enough. Here’s what happened.

Early in the week, I tried to come up with gameplay variations for the game. I found some, but only one of them seemed really interesting and of course it was the most ambitious one in terms of code.

Truth is that the whole game didn’t seem all that exciting. The main mechanic is interesting enough but it gets very repetitive and somewhat tedious quite repetitively. I think this could be fixed with more extensive design work on that basic mechanic, but still the game doesn’t inspire me much for now.

I’m not completely dropping it though. I do like the idea and I still think that if I put in the necessary design work, it can be a quick and fun project, with a lot of potential for colorful and flashy effects. So let’s just say I’m keeping it for later!

Meanwhile, I’ve been thinking a lot about my Melee project. But not exactly the Melee you’ve seen in previous gifs, I got an idea for some pretty different visuals, and a more interesting execution of the gameplay I had in mind.

I don’t really have anything to show for it yet though. I’m actually doing the extensive design work on this one before I go back to spritework and coding. I want to have the main gameplay mechanics as well as little design details, all pinned down as early as possible.

I will certainly have more to tell you about this project next week!

Meanwhile, here’s Timetable! I made this in 3 hours last night, with Pico-8. I’ve been having difficulties staying organized lately, and having a timetable was among the solutions I’ve been considering. So I thought I’d make it a little more interesting!

Of course it is pretty limited, being in this very small resolution, and made only in very little time, but it does the job. Today I’m actually using it for the first time and I might do a little update adding a percentage for the current task, but apart from that I’m quite satisfied with it!

You can get it for free and learn how to use it over on the Patreon!

And I’ll take the occasion to thank all my Patreon supporters. Your support helps me more than I could possibly say. Here are the names of all the 3$+ supporters:

This week has been a little chaotic but I have a good feeling for the one that is coming up!

Next week I’ll have things to show and things to say for the Melee project. Maybe I’ll take some time to work on some cellular automata and maybe on LOKPIK’s design too!

Have a nice week everyone!