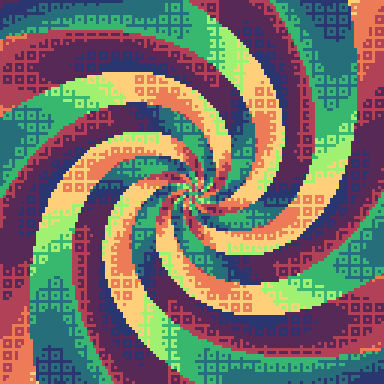 This week I worked on SUGAR almost all week! I also played with it some more to create funky gifs, and I made a start on the boss for Bombs On Venus!

SUGAR now has a spritesheet system! You can have as many spritesheets as you like, of any size, and based on any grid. (8×8 cells, 32×32 cells, 51×51 cells, it’s your call) You can import png files for spritesheets, or you can load (and/or save) a formatted string of pixel data.

And thanks to the previously implemented surface system, you can draw on a surface and then use it as sprite-sheet, which should be great for procedurally generating sprites for example!

I also implemented a transparency system where you can choose which colors to draw and which not to draw when using sprites. And then I implemented good old palette swaps! And just like in Pico-8, there’s two levels of palette swaps in SUGAR: the draw level, where swaps are effective on every individual draw calls, and then the flip level, where the swaps only take effect on what you see on the screen.

Other than that, I’ve added a small time API, where you can check for the time since the program was launch, the delta time since the last SUGAR Step (also newly implemented, updates all the systems) and functions to get the local time and the GMT time from the machine.

And as you can see, I continued having fun with the engine and made a few gifs from that. One thing I love about them is that the maths I’m using only depends on two parameters: the distance of any pixel to the center of the screen and the normal angle of its position. I think it’s amazing all the effects that can be created just from those two variables!

Oh and I absolutely fell in love with this palette, Sweetie 16 which I’ve been using in those gifs!

I’m happy with how this engine is advancing and I do think that I’ll be able to start making a video game with it quite soon!

I still want a map system, a sound system and a text system before I’m there though. The map system should be quick enough to implement, but I have no idea about the sound system nor the text system, so we’ll see about those. I just might start making a game before everything is ready anyway.

It’s not much, but here is the boss of Bombs On Venus, in-game, moving and all! That f***er takes up about 200 tokens already, with barely any behavior to speak of as of yet. That’s not great, but hey it looks pretty good! One thing that bothers me is that I made sprites to pan the skull left and right, and the effect is barely noticeable in action, so I’m going to have to rework the sprites a bit. Oh well!

Before I end this post, I want to mention that Ludum Dare happened this week-end! I didn’t take part, but tons of people did! Ludum Dare is always a great source of inspiration for unusual and experimental ideas, so you should totally check out some of the entries! And if you don’t have the time for that, you can always follow Gamejam Curators on Twitter and on Youtube. They make comment-less gameplay videos of interesting jam entries which really are an incredible resource for any game maker!

And that’s it for this week! Progress has been a little slower than usual because we’ve had extremely nice weather here in France, so I had to go out and enjoy it!

Next week I’m still working on SUGAR and MAYBE I’m starting on a game with it! We’ll see!