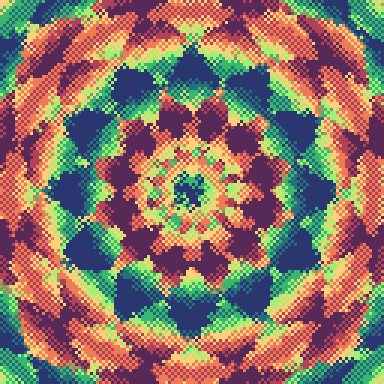 Most of this week was spent on SUGAR! Most notably, I got a solid (and functional) start on my input system. And I also took the engine for a spin (heh) and made a bunch of eye-candy graphics!

These animations were made with procedural dithering! The shapes and colors are defined by maths and the palettes I chose!

They’re very fun to make and I think I’ll be generating one or two wallpaper sets based on this type of algorithm sometime soon!

The input system is working!

I’m very happy because this system was in my head for a few weeks already and I really wanted to pull it off. And now it’s done and it works!

Well it’s not totally done yet, only the keyboard is supported for now. Mouse controls and game controllers should be fairly easy to add from here though.

The idea for the system is that it’s super easy to use and requires very little code on the user’s part. All you have to do is register each button, with a button index, with all the inputs you want for that button. And then you can just call ‘btn(btn_index)’ to check for the collective state of those inputs! There’s also btnp() to check for input presses, btnr() for input releases, and btnv() for getting a value out of joysticks for example.

It’s obviously very inspired of Pico-8’s own ‘btn()’ and ‘btnp()’ functions, and I think I really managed to capture the ease of use of these functions, so I’m very happy!

This brings the engine to a state where the only one thing critically missing before I can make a game with it, is the audio system. But I also want the sprite system and font support to be ready first, because obviously those are important too. The graphics API is also still incomplete and, as mentioned above, the input system needs mouse and gamepad support. Still, we’re on a very good track.

Sunday evening I put together a ‘starter pack’ to help people put their Pico-8 game on Armor Games. The pack contains a code snippet for the splash screen you can see in the gif above (no sprites, 143 tokens), the html file with the classy frame I made for One Room Dungeon, and the javascript file I made to open links from the Pico-8 game, with instructions on how to use that, plus some general advice.

All in all, I’d say my little pack does 50 to 75% of the work to bring your game onto Armor Games.

I gave this pack to Jupiter Hadley, since she seems to be the one bringing Pico-8 games onto Armor Games. So if you’re interested, contact her!

That’s it for this week! It was actually a fairly good week!

Next week I’m working on the sprite system for SUGAR, and then I’ll probably work on the graphics API, and I’ll try to get back on Bombs On Venus a little!

Have a nice week everyone!