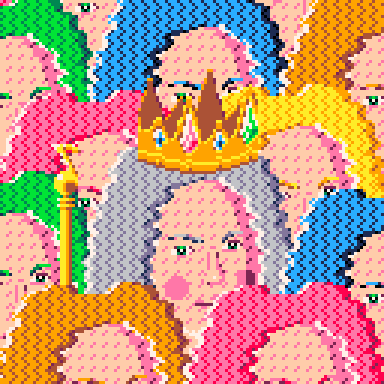 For 3 weeks I made animated portraits of Bach on Pico-8, to go along with @Gruber_music‘s Pico-8 recreation of Bach compositions. There’s a total of 15 portraits and for each one I wrote a short post about one or multiple of the effects I used in it!

This is the first part of the regroupement of these short write-ups!

Super big thanks to all my Patreon supporters without whom I certainly wouldn’t have been able to work on this project at all. Here are the names of all the 3$+ supporters:

With special thanks to Ryan Malm for supporting me at the 16$+ tier, and for such a long time too!

All the source files for these Bach portraits are available to download to all my 5$+ supporters, on this post!

For this first of 15 days of Bach portraits, let’s talk about how I’m rendering Bach’s face!

First things first, we need some reference data! So let’s snatch a portrait of Bach off Google Pictures and cut out the face and hair. 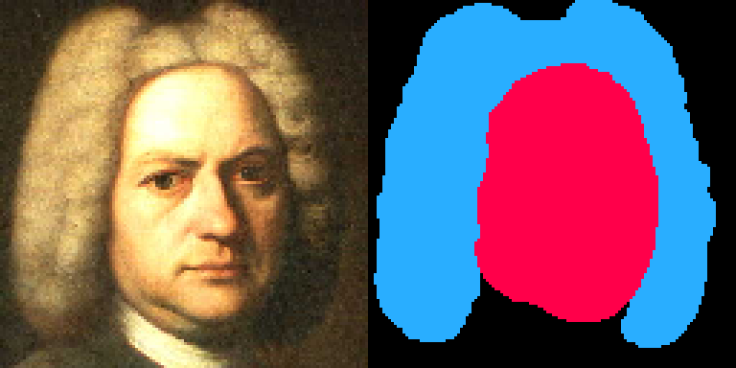 Now import that cutout in Pico-8 and write a tiny program that will generate a long string that registers the shapes’ borders on each line of the screen. The string takes the form of a lua table initialization and it is exported with printh(str,”@clip”), directly to the clipboard! Here’s a short excerpt of what it looks like:

Pico-8 makes a great scripting tool when you want to format or generate formatted data strings like this!

From there, we can use these few lines to render the shapes:

And that will give you an amazing feature-less wax reproduction of Bach’s face! So now the features! 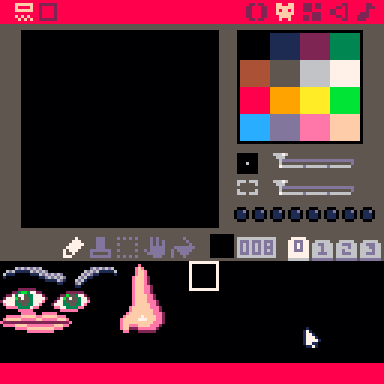 I just love how that looks.

Yes, the features are simply sprites made as close as I could to the original portrait I showed you above. Now I only have to draw them at the right coordinates and we have our Bach portrait!

But of course that’s not it! In this first animated Bach portrait, I’m dynamically scaling Bach’s face up and down!

Don’t worry though, for it is but another simple trick, mainly based on this function:

This function, (‘dis’, short for ‘displace’, because of course 8 letters is too long) will move any value towards the center of the screen (64;64) by the factor ‘fac’, a global variable.

With this function, the cut-out rendering snippet from above becomes this:

Each line of our cutout is displaced towards the center of the screen, and so are the x coordinates that are stored in it.

There is yet a little more to it than that, with the moving fill-patterns and the lighting effect mainly, but for those, you’ll have to dig into the source files yourself!

Here’s a silly bonus screenshot I took while working on this portrait! 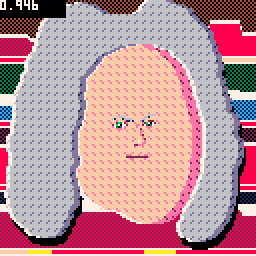 Today’s Bach Invention portrait features stormy seas, with lightning and angry clouds! And all these effects are super simple!

Let’s follow the draw order and start with the stormy seas! That’s somewhat obvious but it’s only one rather big sprite drawn again and again! 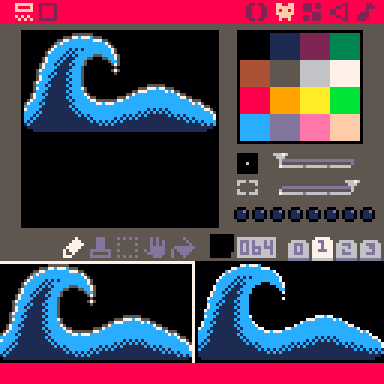 The dark-grey color is palette-swapped with black so as to create an outline of sorts.

We use cos() and sin() to move each 64×32 sprite on the screen. The angle used for these functions depends on the time, the original x coordinate of the sprite and the original y coordinate. It is defined like this:

Draw a big dark-blue rectangle in the background to hide the gapsbetween the sprites and we have our wave effect!

But that will only draw a random broken line on the screen, we need to make it thicker! For that, we just have to draw every line some few more times with incremental offsets, in yellow before drawing the white, and before that, in black on the sides. Here’s a still of what the final result looks like: 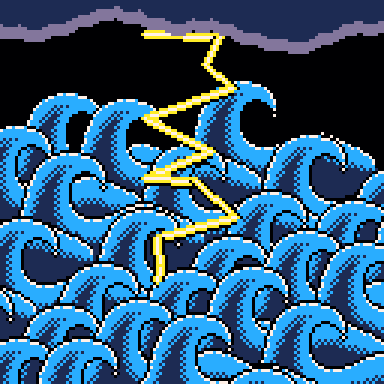 Finally come the clouds! There again, very simple stuff, we just draw a line of circles of varying heights and radius. Both depend on combinations of trigonometric functions used with an angle depending on the time and the x coordinate.

The line of circles is drawn twice, once slightly bigger and lighterwith the color 13 (indigo) and over that, slightly smaller and higher and darker with the color 1 (dark-blue), to make the cloud convincing!

And that’s pretty much it! I’m very happy with this one!

In today’s Bach portrait, I used a super cheap and satisfying effect that I shamelessly stole from Celeste! (the Pico-8 version) It’s the drifting snow/dust!

To be clear, I didn’t actually steal Celeste’s implementation, I didn’t even take a look at it (I couldn’t find it), I simply came up with my own implementation to reproduce this effect.

My point is: that floating dust makes anything beneath it look better and today I’m going to tell you about my implementation!

First off, we want dust particles pretty much all over the screen. So we will use two ‘for’ loops like this:

Note that declaring the local variables x and y only overrides the x and y from the loops for the scope in which they’ve been declared. In simpler terms, the local x and y exist only until the first ‘end’ encountered. You could just as well call these variables something else, I just think it’s cool we can do that in lua.

With this snippet of code, we have points that are all over the screen, but also scattered, randomly placed.

But this snippet will go into the _draw() function and rnd(16) will give different values for every frame… unless we call ‘srand(1)’ right before these loops! That will reset the “Random Number Generation” (RNG) with the “seed” 1 and make the subsequent ‘rnd()’ calls give out the same thing as the last time you called ‘srand(1)’!

If you want to come back to more random numbers afterwards, I would recommend using the line ‘srand(time())’ just after the code for the dust effect.

Now let’s make those dust particles move! We want them to move towards the right in an irregular way! Here’s what I’ve come up with!

First, we add the time(*30) to the x coordinate of every particle, so that it moves towards the right.

Next, we add a circular motion to both x and y, using ‘cos()’ and ‘sin()’. We don’t want that circular motion to be synced up between all the particles, so instead of using the time as angle for these functions, we use the time + a random value, which will be the same for each particle every frame thanks to our ‘srand(1)’ call.

To make it look even more random and natural, we make it so there’s a chance that the motion added to the y coordinate is inversed. For this, we use this tiny bit of code: ‘*(sgn(rnd(2)-1))’, multiplying by the sign of a random number between 0 and 2, minus 1.

Finally, we use a modulo to make sure our x coordinate loops from the right side of the screen to the left.

Once again, calling ‘srand(1)’ beforehand will make sure that we always get the same result for each particle.

And we’re done! Here’s the result and then the complete code:

I’m very tired today so this is going to be a LIST of what you need to do to make those puffy procedurally-generated animated clouds happen! But first, a little introduction!

Today’s Bach portrait features procedurally-generated animated clouds! It’s another cheap-but-effective trick can be used to spice up any background sky!

The main idea rests on how Bob Ross paints clouds. Yes, seriously.When Bob Ross paints clouds, he first uses a darker paint and draws a vague puffy cloud shape, and then he uses a much lighter paint to cover the top of those cloud shapes. The lighter paint becomes the biggest part of the clouds and makes it look like the sun is shining above, while the darker paint shows only on the underside of the clouds, making it look like the clouds are blocking the sun.

And that is pretty much what we’re going to do as well!

Today we’re looking at Bach’s rotating crown and how I implemented it!

First off, you need two crown sprites, one for the outside of the crown and one for the inside. I set them side by side, but you can put one under the other. (or anywhere else, but these positions are good because it’s easy to get from one to the other in terms of coordinates) 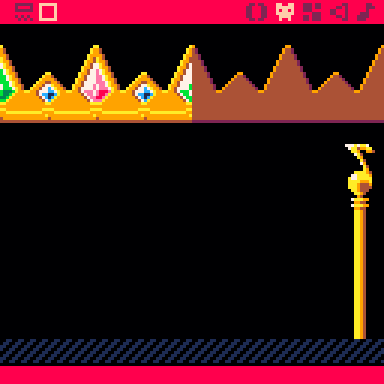 Let’s draw that crown now! First off, we use camera(-x,-y) to choose where the center of the crown will be on screen.

In this portrait, the crown takes up 40 pixels in width on-screen. (for no reason other than it seemed like the right size) So we’ll start with a ‘for’ loop with x going from 0 to 39.

But here comes the trouble. We’re getting to the point where we need to figure out the height offset for every slice of crown to make it look circular. And then we need to find which slice of the sprite to draw for each x value.

I scratched my head on this for longer than I’d care to admit when making this portrait and eventually fell back to keeping it super simple even if it meant it would be less convincing.

What I did is I used ‘x/40*0.5’ as angle for a sin() call that would give me the height offset for each new slice. And for finding the sprite slice, I went with the simplest solution possible: sx=(x/40*64+dt)%64. No trigonometry, we just take the x value, divide it by 40 (the width on-screen) and multiply it by 64 (the sprite’s width).

Before deciding to go with that, I fumbled with trigonometry for a long while to no avail. In the end, I figured that to do this properly, I would need an ‘arc cos’ function, which would give me the proper angle for both my height offset calculations and my sprite slice approximation. However this function is absent from the Pico-8 API.

Two hours ago, it occurred to me that the formula ‘cos(a)²+sin(a)²=1’could be used to make a custom acos() function. It’s too late now, but maybe I’ll get another occasion to try that out!

Thank you for reading! I hope this was informative!