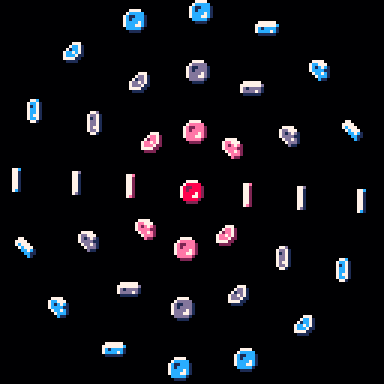 This week I re-published my old Picozine roguelike write-up and then I started making a game!

Second write-up for January! (totally not cheating) This one was published in the Picozine #4, but that was over two years ago! I’ve been wanting to re-edit it and put it on the blog for a few months and now it’s done!

While some of the advice in this write-up is stuff you probably already knew, I actually think there’s some very good advice in there that I had totally forgotten myself!

Right after writing this, I set out to make a video game in 8 hours, as I said I would in the last weekly recap. Except it turned out I was very tired that day, so I only got a very slow start and then the anxiety kicked in and I did little work during the following days.

But! While trying to rest, I played The Elder Scrolls IV: Oblivion and let me tell you a bit about it!

When the Elder Scrolls V: Skyrim came out, I was in high-school, so I had plenty of time to play it. (and mod it – and break it) And I genuinely don’t regret all the time I sank into that game, it’s a really good game! To this day, I still feel like Skyrim is one of the best example of open-world games. (although that might be in part because I didn’t play many others)

But I never played Oblivion until last week! And I was very curious about it because I’ve heard lots of people claim that it was better than Skyrim! (fyi, Oblivion came out in 2006 and Skyrim came out five year later, in 2011) I wanted to see what that was all about!

And yeah, I can see why people say that! Even if I don’t completely agree!

For one thing, I want to say that Oblivion looked a lot better than I anticipated! Sure it’s not Skyrim but it’s actually not that far! Although, Oblivion’s textures (especially in caves where it all looks like grey-ish mud) are even more confusing than the ones in Skyrim and make it very difficult to understand where you’re looking sometimes. Also, the UI of Skyrim is a lot more elegant than the UI of Oblivion.

Next thing that I noticed is that the difficulty progression is very different, and in my opinion actually pretty bad in Oblivion. It’s VERY difficult at first. You don’t have a lot of health and you don’t have health regeneration! Like, you can drink potions and and there’s restoration spells, but those only go so far… The only ‘free’ regeneration is sleeping, and even when you stumble upon random beds in the caverns, you can’t use them if there’s enemies around! That felt weird!

On the other hand, Skyrim is very easy, even in higher difficulty modes, and quite honestly, I like it that way. I just want to have fun, not die and go back to previous saves all the time.

But the one main argument I hear the most in favor in Oblivion is about the quests. And it’s true, the quests in Skyrim fall into three categories: find this place/item, talk to that person, kill these people/things. The quests in Oblivion are a lot more diversified, with a lot more conversations with NPCs and some quests which don’t even involve fighting at all! But there is one very important caveat. The voice acting in Oblivion is pretty damn bad! Some voices are pretty good and convincing but a lot of them are either overplayed or underplayed, and there seems to be an attempt of procgen conversations between NPCs (really cool initiative btw), with bits of conversations glued together, and it sounds very very rough.

There’s a lot more to say about both Oblivion and Skyrim but I’ll leave it at that for now. Needless to say both are really good and interesting games, but Skyrim is still the one I like best.

Anyway! Back to my stuff! I did get some progress on the game I wanted to jam out, except I completely overhauled the design I was going for.

I am now making a game about carving out a tiny dungeon as a tiny adventurer fights tiny monsters and collects tiny coins and tiny treasures and visits tiny shops in said dungeon!

It’s going pretty well and I hope to finish it before the week-end!

And then I’ll go back to SUGAR!(-32??, I haven’t decided yet, keeping the all-caps though)

That’s what I’m doing next week!

One thought on “Week 93: Dungeon Time”