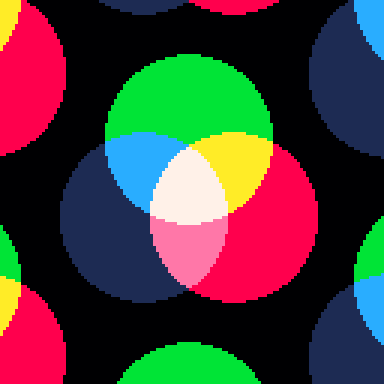 This week went better than the ones before!

Making this really felt refreshing! This one was based on an idea I’ve had in mind for a while, using bits as RGB values and optimized the same way as the Yule Log I made for X-mas.

I really feel like making more Pico-8 doodles, and especially fumbling with Procgen stuff again! The ideas I’m having right now are a bit too complex but I think I’ll find something good soon!

Something else I’ve been working on this week is a game engine, or a game framework more like. Basically a C++ library that I will be using to make games from scratch, and which hopefully will be easy-ish to port to consoles! It’s a little too soon to say much about it just now but obviously it will be inspired from Pico-8 and my experience from making small games and procgen stuff. (the procgen part is actually particularly important to me!)

The idea is that this engine will be very good ground to build an ambitious project that’s been cooking in my mind for close to a year now… the spiritual sequel to Gar’s Den!

Not saying anymore than that for now! This week I barely coded at all, it was mostly about deciding what I wanted and what I didn’t want in this framework, and how it would be organized. This next week, I’m going to start coding the thing and maybe start making a small game with it already! (“fail fast, fail early” as they say)

And now for something completely different!

Yes, so this is my Friday you’re looking at there. Well, the effect itself took me about an hour on Thursday evening to get just right, but then it took me a really big part of Friday to reduce the code to 280 characters so I could post it on Twitter with the gif! And to my own surprise, I actually did it! Went from >640 characters to 278 and had to get pretty creative to get there, it was very fun!

And better yet, I wrote a tutorial about the effect and how to implement it yourself! I think I managed to make it very accessible too! It’s got >1800 words in it and it’s the Doodle Insights #20!

And you can already read an unedited version on my Patreon through the 5$ reward tier!

The final version will appear on the blog on Tuesday or Wednesday! (I’m thinking Wednesday, for the sake of pacing)

It has been an ok week! I feel better after my little break and I’m pumped for the coming week!

This coming week, I’m going to start coding my C++ framework and maybe I’ll cry a little because C++ is hard but hopefully I will also get to make something really cool with it!