Last week I finished ‘Invaders… From Space’ (now awaiting approval from Apple), then I wrote a weekly recap to cover the three previous weeks where I shared a few insights about Unity, and then I worked on different small things and got very confused.

I still have a lot of things to do, with various experiments and consequent write-ups coming up and Flying Pop-Pop. But having so many things to do actually frightened me a bit I think. From there I really wasn’t sure what to do, was I supposed to work on all these things, should I relax, or maybe should I try to find something I really did want to work on and work on that.

In doubt, I played video games and kept working, even if somewhat likely lightly, on the various things that I felt should be worked on. (mainly WFC and a wip Pico-8 Doodle)

Let’s talk about that shortly. This is one of the WFC implementations I’ve been the most curious about. It takes an audio track, turns it into graphic tiles and those are fed to a wfc algorithm. When the algorithm is done, the tiles are then turned back into music. Generative music.

The original music I’m using for this was made by Chris Donnelly (@gruber_music) and you can listen to it on this tweet of his. He’s very kind and super talented!

The results of this experiment are less exciting than I hoped but they are what you would expect: a continuous mix of the original track. I’m still hoping I can get it to produce some more interesting things though, which is why I haven’t posted any audio of it yet.

Either way, playing with the audio-related part of the Pico-8 ram was pretty fun! Here are some notes I made from the early experiments! 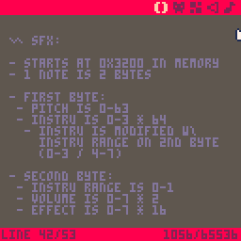 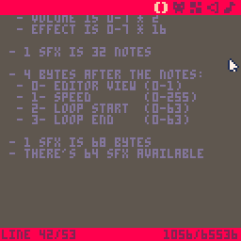 Obviously, I will be writing more extensively about this in the awaited procgen post, whenever I actually get to that. (soon, hopefully)

In the last Weekly-Recap, I exposed a few things that I found particularly interesting in Unity and one of them was their curve system, which allows you to edit curves in the editor and then evaluate them in the code. I wrote that I really liked that and that I was totally stealing it.

Very much work-in-progress obviously but the curve is there, you can place points (but not move them yet) and I have figured out a way to export it to a lightweight system that is exclusively for computing purposes. (but didn’t implement it yet so maybe it’s flawed in some way, you never know)

Next step is moving the points and modifying their tangents. Then, adding lots of buttons around the curve’s frame to make things easier. (that’s what tools should be designed for imo)

When it’s done (sometime in the next two weeks maybe??) it will be available exclusively to my Patreon patrons, at least for a while!

Final thing I’ve been working on is this:

Right now it doesn’t look super exciting but I want it to be a minecart descending an infinite rail line!

The physics are already pretty much done as you can see. Now I need to make the rail more likely to go downwards while keeping a possibility of suddenly going back up or making loops because those are fun, obviously. And then make it look good. And then write a ‘What Magic Is That?’ about it!

Hopefully all that gets done next week!

OK, I wrote about all the things I did do, let’s write about what I didn’t do and why this post has the title it has.

As many of you are aware, Ludum Dare happened this week-end. (and is still happening for the jam people) If you don’t know what Ludum Dare is, it’s only the biggest gamejam, and a lot of fun, you should check it out.

Although I learned it was happening very late before it did start, I actually got the time to get really excited about it and particularly about one of the themes from the final theme voting round. That theme was “moving fortress” and it was for me the best theme in that round and by far and I hoped that enough other people would agree with me. This did not happen.

The theme that did win the final voting round was “running out of power”. At first I was just disappointed I wouldn’t be making the action-packed game I had thought up for the “moving fortress” theme. But then I started to realize that the chosen theme did not inspire me anything I wanted to make.

Now, obviously some people did like the theme and I’m sure there will be a lot of great games coming out of this jam to prove me wrong. But. To me, this theme is simply un-fun. Running out of power is quite honestly a depressing and frustrating thing to happen. Of course this can be said about many other things: weapons, being a monster, staying in one room… But it seems to me that this theme also, and mostly, lacks opportunity for excitement. Within these other themes, there’s reason for action, for discovery, for pretty much any type of game you’d like to make. In the “running out of power” all I see is a reason for making a game about survival, may it be yours or your opponents’, based on a very lame death cause: running out of power.

Of course all games are not about opponents or death, yet I feel confident that at least 85% of games submitted to this Ludum Dare will be about losing-cause-you-lost-all-your-power in a way or another and I think that’s a shame.

I didn’t want to be part of that and that’s why I tried really hard to come up with something more original with the theme… and didn’t find anything I felt would be fun to make. And that got me really disappointed in both the theme and myself.

This feeling may not be a total stranger to the fact that I was still quite tired and already feeling pretty lost after the sudden end of “Invaders… From Space!”‘s development. Going from a finished project to a new one is never as easy as it seems.

Despite everything, this is a new week, and I’m actually feeling pretty good about working on stuff again. I hope I get to see some interesting LD games in the next few days. (if you made one, do let me know)

I did want to address that the upcoming articles and the supposed regularity of the weekly articles have been an unnecessary source of pressure for me lately. That’s why I’m deciding to open up those weekly articles to new irregular series, both Patreon-exclusive and public. The Doodle Insights may be replaced by a think-piece about games or gamedev once in a while and my patreon supporters will be treated with insights about my Love2D framework shortly. I truly think this is for the best and that you will enjoy the possible diversity in those new types of post.

I wrote a lot more than I thought I would so thank you for reading up to the end!!

Next week, I’ll be working on pretty much everything I wrote about in this post! WFC, curves, minecarts, articles and possibly Flying Pop-Pop!