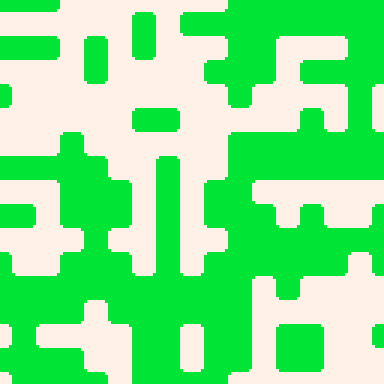 This week I did lots of things. Here’s one:

I’ve been wanting to implement the Wave Function Collapse generation algorithm in Pico-8 for a while now! It’s an algorithm that takes a tiled sample and generates bigger samples based on the construction of the original. The results are surprising in their complexity and very good in general.

It is not yet considered as a Pico-8 Doodle because I do want to push it a little further if I can! (and I think I can)

I will be writing about it in this next week’s Doodle Insights, so look forward to that!

This week’s Doodle Insights was about thinking of colors as numbers and what that allows you to do!

It ended up longer than I intended but it was pretty fun to write! Check it out!

On Friday I made the first Itchy Friday happen!

On Itchy Friday, I ask people on Twitter for free itch.io games, I play them (if I can) and I recommend my favorites with mini-reviews! This will be probably be happening once every two weeks for now! (it was supposed to be a weekly thing but I don’t think I’ll be able to do it that often)

Anyway, I found some super good games and you really should check them out!!

Flying Pop-Pop was the main focus for this week but I couldn’t do as much as I wanted to. At least I’m finally satisfied with the different effects I added and getting there was not easy.

I also worked on a new enemy but didn’t share any gif from it yet… So here goes an weekly recap exclusivity!

Flying Pop-Pop is still set to release end June / start July but it may get delayed to a bit later in July. Because I’m gonna have some work to do.

Someone reached out to ask me if I did any freelance dev-ing. I answered that I’m open to opportunities… and after a few more mails, I’m taking the opportunity.

I’ve been pretty shy about contracts up to now but I actually think this is a good thing for a few reasons:

Of course I can’t say much about the contract itself or on the project yet, as we just agreed on it. (I may have said too much already) But I should be able to show some of it along the next few weeks and possibly talk about it in the weekly recaps. My patrons may also get more detailed info!

This however does not fully stop the development of Flying Pop-Pop or the weekly articles or the Patreon content. All of these will keep on coming, even if not always on time. Flying Pop-Pop in particular will be the most slowed down by this.

Meanwhile, I will be starting a new Patreon-exclusive series that will be less about code and more about design and systems! If that sounds interesting to you, sign up there!

This was a very busy week! But good!

Next week, I’ll be focusing on my new contract work! But I will also write the Doodle Insights about logic data generation! There should even be one or two Pico-8 doodles! And hopefully some progress on Flying Pop-Pop!