Most of this week was spent on the game again!

One Pico-8 doodle this week! Plus a few variants of that doodle further down!

Ok, so last week I said that I was definitely gonna finish the game that week. I was wrong. Actually I spent a good half of the week trying to do music for the game and failing but also learning. I also took the best part of a day to add SFX to the game. So the only missing elements to the game now are a tiny bit of polish, a settings and a pause menu, the music, and a title. 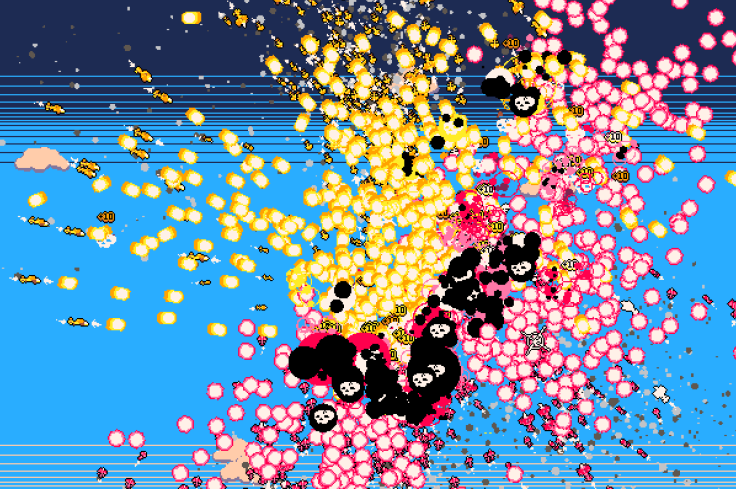 I have over 50 title ideas listed in a text file and I don’t really like any of them very much. I’ll probably end up picking one of the simplest of them if I can’t find anything better.

I also made a menu system for the game, which will be very useful for making actual menus, when I get to them.

So there isn’t much left to do on this game. Still. Will it be out this week? I really don’t want to say anymore. But yes. Yes it will be.

Let’s talk about what I want to do after this game gets released!

Two weeks back, I said that I’d like to work further on that dogfighting game and make a retail product out of it. Given the difficulties I currently have with this game, I really don’t feel like doing this anymore. So instead, I would like to go back to the previous plan, which was to let this game be about testing the LÖVE engine and then make a retail version of One Room Dungeon, my Pico-8 Ludum Dare #37 entry from last December!

Before I get to that though, I have three doodle ideas sitting in a notebook and that I really want to get done and also I would like to do a second tutorial! The last tutorial was about palette swapping but this time, I want to do one about explosion effects! The last tutorial had taken me almost a week to make but this one should take less than half of that, as I am ready to not do the same mistakes again!

Will these plans change? Yes, probably, that keeps it exciting!

And while we’re on the subject of tutorials, my Pico-8 beginner workshop is in the hands of the ResistJam and should be uploaded to their Youtube channel sometime soon. I’m not super happy with it but it’s ok I guess. I found out that I talk English very differently (and much better) when talking directly to someone than when talking to people I don’t see (e.g. when streaming). Gotta work on that!

And that’s it for this week! It wasn’t a very good week, but it’s ok, I’m learning about some stuff!

Next week, aliens will hack into my computer, finish my game and let me release it. Then there will be Pico-8 doodles and the tutorial will probably be for the week after.

Have a good week!