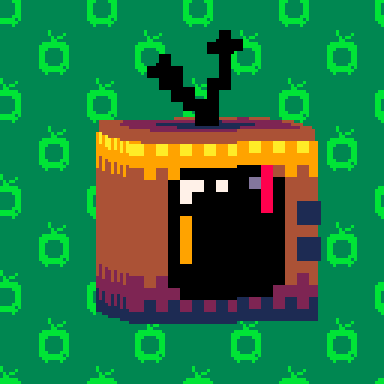 I’ll do as if I was writing this on Monday and the Ludum Dare results are not out already and I don’t know One Room Dungeon is going to be #50 on the compo overall ranking or even how cool that is.

It’s been a pretty good week!

I finally wrote the post-mortem for One Room Dungeon! I won’t write about it here but you can (and should) read it there! I also started on a pretty crazy project of making a game-engine inside Pico-8.

This week has been a good week for the doodles!

The TV doodle is my favorite doodle I’ve done so far! Someone suggested I make a gamejam happen and people would have to make games for the 10×11 screen of the TV. I like the idea a lot and it’s gonna happen soon!

At the beginning of the week, I asked Twitter if anyone would be interested in a Pico-8 game that would teach you Lua. The answer seemed to be yes. I asked because I knew it would be a big project with a lot of technical challenges. But I like challenges.

So I want to make a game in which you can edit and execute code, all within the game. That’s not possible in Pico-8, which is why I chose to make my own engine inside Pico-8, so I could fake code editing! What will really be happening is that the player will be editing a system of instructions, simulating Lua code and that system of instruction can be executed at any time, like you would execute code from Pico-8.

This system is proving to work pretty well so far, although it is obviously very slow. Hopefully the speed shouldn’t be a problem, as small programs can still be executed at a steady 30fps, with 1500-2000 instructions per frame. But I do expect that some optimization will be needed at some point.

I started working on the code editor. All the editing will go through menus which will be gradually unlocked in the main game. It should work out OK.

I’m not sure what the main game will be yet. I have some ideas but I think they are too ambitious. I need to think about it more.

Because this project is going to be a long one, I will be working on it on and off for now, while focusing on other projects.

I also took some time during the week to answer questions on curious.cat. A lot of them were about the first steps in learning to use Pico-8, how to get Twitter famous (which I’m not but ok), how do I produce that much content on a daily basis and how am I staying alive. A lot of the questions were asked in a very interesting perspective and I answered them all as best as I could! Don’t be shy and do ask yours if you have any!

Next week I’m making a post-jam update for One Room Dungeon! Then I’m contacting a publisher! Then I’ll be preparing the TV-doodle gamejam and along the way I’ll try to get some progress done on the Pico-8 game engine! And more Pico-8 doodles!

Have a nice week and a great year!