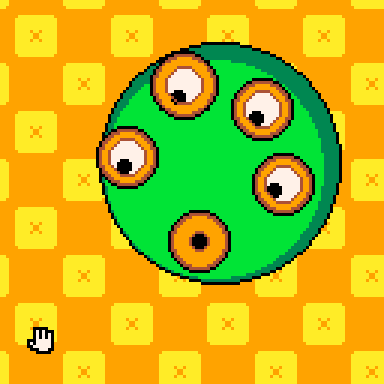 Week 34 was alright! But this post is actually gonna be quite short!

Early this week, I discovered the joys of metaballs, mainly thanks to Zack Bells who told me they were easy to do. Then I added metaballs to the side-project from last week, the one that is not Tetris. Then I kept working on that, mainly struggling with shaders and making cool effects.

The Pico-8 doodles this week were quite good!

So metaballs are a very cool-looking effect and also they really are super easy to do. If you want to know about the technical details of what they are, you should look it up, it won’t take you too long. But here’s the easy way to do them! You make a sprite of big circle that fades out from the center to the outside on a transparent background, then you draw that sprite wherever your balls are and at whatever their size is, then you posterize and then (optional) you change the palette. That’s it. (I am told it’s actually called “alpha thresholding”)

So the plan for the not-tetris game, which I’m gonna start calling Tetreach because this is the best I could come up with yet, was to try doing layering tricks, using multiple shaders and various effects. Then I discovered metaballs and I felt they were better than the effects I had in mind. So I did some layering with metaballs!

Also you can see towards the end of the GIF that the gameplay changed a bit! Now you can break through placed blocks! I liked it so I kept going that way and now I have the biggest part of the gameplay done!

And that’s it for this week! I spent a good amount of time struggling with the gameplay for Tetreach and then just making shaders (GLSL is terrible). Also towards the end of the week I started feeling really bad for almost no reason and working was hard then. I feel better now though!!

Next week, I’m releasing Tetreach, although that name is likely to change by then! Then, Christmas is coming so I’ll be working on a Christmas surprise! I will also write the post-mortem for One Room Dungeon!

and then write to a video game publisher.