Those weeks happened. I’m pretty sure of that. But I’m not sure exactly what went into them. So this will be a short post which hopefully will launch these recaps back into an actual weekly basis.

Somewhen towards the start of these three weeks, I’ve finished Blast Flocks!

I’ve been waiting for Castle’s ‘go’ to publicly announce the game, and still am. The game should work better with the new version of Castle, so we’re waiting for that!

The completion of the game meant mostly bug-fixes but also a design fix, namely overheating! Because when you had huge flock, you could just shoot endlessly and no-one could ever approach you, let alone defeat you. Now, if you keep on shooting for too long, your planes will overheat and then will start spontaneously blowing up one by one!

During these three weeks I also completed my Tiny Tetris Classic!

It’s not released either yet because I haven’t had the mental energy to do it, and also because I only have a Windows version and only a very vague idea of how to make Linux and Mac versions.

But it is finished, and it has 6 different visual modes, some simple sfx, and it will save your highscore as well as your settings!

The release should happen this week and it will only be on Patreon, for 5$+ supporters!

I made a Patreon-exclusive Discord! If you’re an active supporter of mine on Patreon, you can get the invite over here!

This will be a good place to ask me questions and see previews of what I’m working on currently, and also just chat about whatever!

That Discord is available to all my Patreon supporters, whatever your pledge! 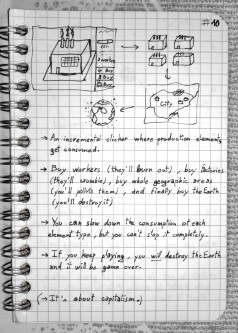 I’ve also been keeping alive a stream of daily-ish game ideas on Patreon! The three you see above are the public ones among the total of 15 currently existing game ideas.

These are fun to come up with, but not always easy! It’s definitely an interesting challenge though!

And I will actually make one of these game ideas happen, starting this week, for Castle!

It’s an idea for a minimalist multiplayer Real-Time-Strategy game and I think it could end up very fun and interesting! I should be spending the next three weeks on it!

That’s it for these weeks! I’m sorry for the shallow report, next week should see a return to more thorough ones!

As usual, I want to thank all my Patreon supporters for their invaluable support! Here are the names of everyone of the ‘Accredited’-and-above tiers!

This week I’m working on a new game for Castle! My goal is going to make as much of the game as possible before the end of the week, and then I’ll be able to take my time to add all the necessary polish and bugfixing! I’ll let you know how that goes in the next weekly recap!

Have a very nice week!