My 7DRL-turned-14DRL game, Gar’s Den is out! This recap is gonna be about making and finishing that game and then about what’s coming now.

Here’s a very quick random prototype I made on Tuesday! 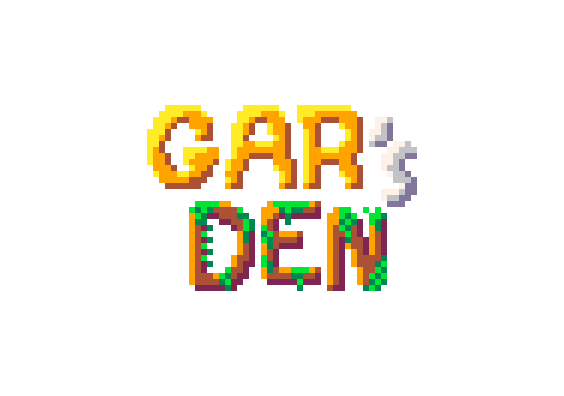 Gar’s Den is finally done! You can play it there on the Pico-8 BBS or there on Itch.io!

Here are the four main tasks I’ve been switching between all week:

As explained in last week’s recap, I spent 80% of the 7DRL period implementing thechnical things like lighting and dungeon generation, which left me with a very unfinished game with 90% of the actual content missing on the 7th day. So this week was all about the content! But also fighting Pico-8’s token limitation on a daily-basis for about 1-5 hours a day. (on the final Pico-8 cart, there’s just 15 free tokens left)

Polishing the game felt very refreshing but saving tokens grew boresome very quickly and in the end I’m just very happy I’m done it. Restrictions are fun, until they start really getting in your way every few hours.

That said, this certainly won’t be my last over-ambitious Pico-8 project, especially with all that I learned from this experience. But that will be for another time!

Back on the game, there are three floors, each with their own set of enemies, and then a boss floor. Each of the first three floors have a shop with better seeds than the last shop. Gotta grow your berries, vegetables, swords and life points, sell what you don’t need to afford better stuff and make the rest of the game less difficult. You start with 3 life points. When you die, you have to start over. Beat Gar on the 4th floor and you win the game!

Balancing this was pretty interesting. Before I choose to implement half-hearts, the game felt a tad too hard on the first level. So I added those half-hearts, made bats only deal you a half point of damage and added wildberries, which sell very poorly but heal you a half point and you can loot them off bats and by cutting down bushes (i.e. they are common). I also rebalanced all of the enemies of the other floors to adapt the difficulty curve.
But then I thought the game was too easy, so I made every enemy have slightly more health and revamped the different swords, basically defining how many hits each enemy should take with what sword.
Then it felt like the plants were growing way too quickly and didn’t let you go adventuring after planting them. So I doubled all of their growing times. And then it was waayyy too long. I did reduce the times again but I also made the seeds cheaper and made the fruits sell for basically the price of three-four more seeds. The rather short growth time makes the rhythm of the game much more interesting, letting you go kill more enemies while they grow and being well-advanced when you come back.
Because death means starting over, it felt very important that the plants should not take too long to grow fruits. Fun fact: the first growth times I set for the sword seeds and heart seeds were four times higher than the final ones. While making the player wait for their better sword seemed like a good idea, I quickly realized it was killing the rhythm of the game.
It took yet another round on all the values for items, swords and plants before I was happy with it all.

On the more technical side, I did my best to rule out every error I could stumble upon both in-game or directly in the code. Just an hour after release, Sean LeBlanc (check out his stuff, it’s really good) reported a game-breaking bug on floor 3 with the shop getting non-existant item names in the generation. Fixing it took very little time and the new version was uploaded right after. Two more bugs were reported today, one with the door sticking you into walls in a very specific case and another one making the player sprite disappear (probably linked to those damn doors as well). Those are not fixed yet, I need to look into them. Truth is, I’ll need to clear out some more tokens before I can fix these. Those two errors should not be common at all and the game should be enjoyable as it is right now. (still gonna fix those errors soon)

So far, the reception the game is having is very positive! People say it’s hard but fun which is good because I was seriously worried I had made it too easy!

Again, you can play the game there on the Pico-8 BBS or there on Itch.io! Please do and please tell me what you think of it!

Ok, so what now? That random prototype from the start of this recap, I want to make more of those. I’m thinking making a series of prototypes like that would be interesting but I’m still pondering what format they should take. I think you should be able to play them, not just watch them in gifs. Maybe making “mixcarts” would be a good option for this! But I also have to define the level of polish these prototypes should have if I’m letting you play them.

This week I’m gonna try to make at least two of those prototypes and figure out what I should be doing with them!

Something else I want to do this week is write more articles! Every week I write a 600-1000 words week recap on Monday and then a Patreon-exclusive 1000-1600 words Doodle Insights on Tuesday. I really enjoy writing those and I wish I could do it more while also making games and stuff. But it also takes time which can be difficult to find sometimes. This week I have that time and I want to write at least one article about *something* that will be free for all to read and maybe the start of a series. It’s likely to be either on game design or code design.

Other than that, I also want to figure out what I’m gonna be making in the next few weeks. Making a premium game is one of the main things on the table currently. I’m also considering starting a game design video series with very quick episodes on the Trasevol_Dog Youtube channel.

I need to do the linux build for Blast Flock.

The Pico-8 doodles shall make their comeback.

And that’s it for this week! It was a rather productive one!

Next week I write stuff and make quick things!

Have a nice week and play Gar’s Den!